Troyes Champagne Métropole enjoys an ideal location at the heart of eastern France, yet remains just a short hop from Paris. 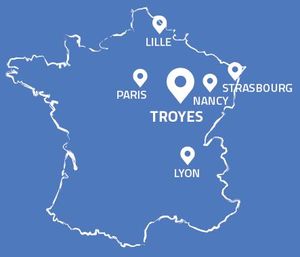 Just 90 minutes from the capital, the area is a great place to live and work, ideally situated at the crossroads of French and European transport networks (access to the A5 and A26 motorways, serving both Northern Europe and the south of France).

Mainline trains running between Paris and Basel also pass through Troyes, while the city is within reach of Paris Charles de Gaulle and Paris Orly international airports, as well as Paris Vatry Airport and Troyes-Barberey Airport.

The community sits in the south of the Grand Est region, part-way between Lyon and Lille – a prime spot at the crossroads between Paris, the Paris region and the rest of Europe.

Troyes is served by two motorways:

There are six main feeder routes to Troyes:

It takes just 90 minutes to get from Paris Gare de l’Est to Gare de Troyes, with several return trips a day to and from Paris, Culmont-Chalindrey, Belfort and Mulhouse, and just a stone’s throw from the old town centre.

Use the new VITICI tool to plan your journey to and from Troyes and the surrounding areas by public transport.